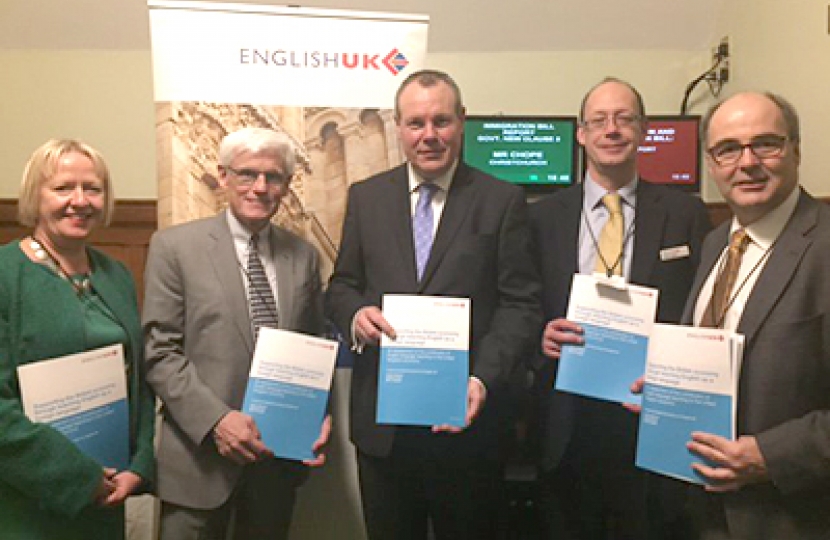 MPs and their advisors joined members and staff of English UK and industry stakeholders at the House of Commons for the launch of our research into the value of English language teaching.

The report shows that international English language students' spending was worth £1.2bn to the UK last year, supporting around 26,500 jobs and contributing more money to the government than their cost to public services. Supporting the British economy through teaching English as a foreign language, produced for English UK by Capital Economics, contains the first rigorous assessment of the ELT sector's value although estimates have been extrapolated from broader research in the past.

Exeter MP Ben Bradshaw, attending the launch, said he was in regular contact with English UK member centres. "I feel very angry about the adverse impact of Conservative policy on my language schools in Exeter and the huge extra difficulty and expense they are having to go through to protect their services to their international students and the knock-on effect on my local economy."

Bournemouth MP Conor Burns, who made his maiden speech in the Commons on the ELT industry, was also interested in the report. Looking at the report, he said: "My belief is that students should be taken out of the migration figures: they are visitors."

English UK Chair Steve Phillips said: "I was very pleased to see how many MPs came and that we had serious conversations with them about the importance of our sector.

"This is just part of the process: we need to get this valuable information and our key points over to the Government, because we need government support to help our industry grow.

"Now we are asking our members to get involved even more. We want them to use this research and continue their engagement with local MPs. UK ELT is a vital part of our export economy and MPs should help by putting pressure on the Government to support us."

Other MPs dropping in to the launch were Andy Slaughter (Hammersmith), Craig McKinley (South Thanet), John Pugh (Southport), Jonathan Lord (Woking) and finally Paula Sherriff (Dewsbury and Mirfield) and Rupa Huq (Ealing Central) who dashed in to ask questions about the industry just before being called to a vote. Some MPs, including Caroline Flint and Caroline Ansell of Don Valley and Eastbourne, sent advisors in their place. All of them took away a copy of the report as well as a single-page summary.

Huan Japes said it was good to have hard facts about the value of ELT for the first time, and that the report would be useful not only for English UK to campaign for government support, but also for friendly MPs to do so.

Since being elected to the House of Commons in 2010, Conor has supported English language schools, a vital sector in our local economy. contributing 100s of millions of pounds to the local economy.